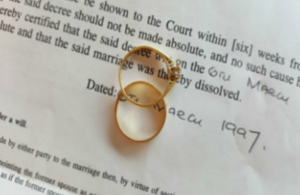 The stress of applying for a divorce could be eased thanks to a new online service that removes the need for paper forms.

The online service offers prompts and guidance to assist people in completing their application, and uses clear, non-technical language. The whole process can be completed online, including payment and uploading supporting evidence.
More than 1,000 petitions were issued through the new system during the testing phase – with 91% of people saying they were satisfied with the service. The new, refined and easy to use version was rolled out across England and Wales from 1 May.
Court staff currently spend 13,000 hours dealing with complex paper divorce forms, but this simpler and less technical online service has already contributed to a 95% drop in the number of applications being returned because of mistakes, when compared with paper forms. This means only 0.6% of forms have been rejected since January.
Justice Minister Lucy Frazer, said:
Allowing divorce applications to be made online will help make sure we are best supporting people going through an often difficult and painful time.
More people will have the option of moving from paper-based processes to online systems which will cut waste, speed up services which can be safely expedited, and otherwise better fit with modern day life.

These changes are part of £1 billion programme to transform the court system - making it quicker, more accessible and easier to use for all. Other examples of the government’s court reforms which are making access to justice easier for everyone include:

• A digital system which makes it quicker and easier for people to claim money owed, resolve disputes out of court and access mediation.
• A new service which allows people to submit their tax appeals online – drastically cutting the number of applications being returned as incomplete or inaccurate.
• A paperless system, in operation at Lavender Hill Magistrates’ Court, which means thousands of offenders caught dodging fares or using fraudulent tickets can now be punished more swiftly and effectively.

Notes to editors:
1. Two case studies are available for interview. Please call the MoJ press office on 020 3334 4872 for more information.
2. Rebecca, who did not want her last name to be used, received legal confirmation of her divorce 11.5 weeks after submitting her application - the paper process takes around six months. She said: “Thank you ever so much for making this process so much less painful than it could have been, especially as a disabled person. The service was a lot easier because I use a wheelchair and didn’t have to go out, and I also found it very easy as an autistic person to get support from the team when I had questions.”
3. Elaine Everett was separated for more than two years before applying for her divorce, which she has now received. She said: “It was marvellous, pain free and less stressful than the paper form which I tried several years ago to complete but got fed up of it being rejected.”
4. Some 91% of people satisfied with the service relates to 1100 people questioned.
5. Evidence has shown 40% of divorce applications are rejected at the first stage due to the forms not being complete or missing documents. Since January, from the circa 1100 applications only 0.6% have been rejected, due to us monitoring, evaluating and understanding the reasons for rejections and developing the system to eliminate these.
6. Speaking at a lecture earlier this month, Sir James Munby, President of the Family Division of the High Court, said: “The online divorce pilot has been a triumphant success and shows, to my mind conclusively, that this is – must be the way of the future.”